skip to main | skip to sidebar

It's been a while, hasn't it? I've been beading plenty, I just haven't been writing about it. Haven't really been writing about anything, to be honest, because since I entered the world of full-time employment I've usually been too busy or too exhausted.

One of Lori Anderson's awesome Bead Soup Blog Parties, though? Totally worth coming out of blog-retirement for. Apologies for not posting before the big reveal date, but life got in the way yet again and my time and energy landed up directed elsewhere.

This year I was partnered with the super-talented Leona Smith of Lynxofsilver.com, who does wonderful things with metal clay - go check her work out! The theme for the exchange was hoarding, so we each had to send at least one precious hoarded bead. Leona was kind enough to send not one, not two but three different sets of beads, giving me the chance to flex my design muscles and make three very different items.

(Sorry for the photo quality, by the way - my camera's ancient and it's really hard to find a spot with decent lighting in my tiny apartment)

The first beads I used came from a lampworker called Damaris, and my heart just broke at all the beautiful colours and textures she incorporated into them. 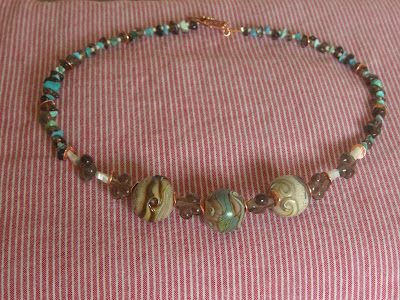 My first thought when I saw them was cappuccino coffee, but that might just have been me opening Leona's package straight after coming home from a long day at work. As I gave them more attention, however, the greys and browns and aqua shades made me think of the sea on a stormy day.

This was the only piece I bought extra beads for - some smoky quartz flowers, plus some brushed copper discs to add warmth and a pretty copper flower toggle clasp that doesn't show in the photo. There's also gem chips in there - smoky quartz and some tiny slivers of turquoise. To smooth it all down, I used cream Delicas as tiny spacers and put in a few little mother of pearl stars gifted to me by a friend. I was going for a laid-back, beachy look and I think I more or less pulled it off.

*****
The second set of beads were a matched set from Kazuri; they were beautiful, but not quite large enough to act as focals and I have to admit, at first I was stumped as to what to do with them.

I spent a couple of weeks puzzling, then resorted to my usual tactic of putting them in a cereal bowl next to other random beads from my stash that matched. The first one that caught my eye was a small ceramic owl gifted to me from a friend in the US, but again, it was too small to be a focal.

I was forced to improvise... 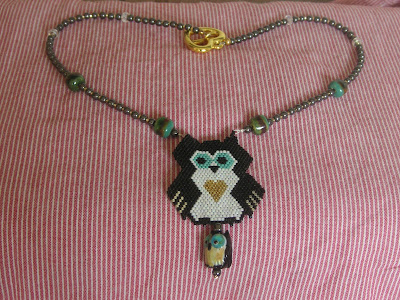 I do feel guilty that the Kazuri beads were relegated to the necklace straps (they're the aqua ones with the dark horizontal stripe), but I had SO MUCH FUN making that brick stitch owl.

*****
The final beads Leona sent me were particularly special because she made them herself from metal clay - they were a mix of bronze, steel and copper, with a beautiful mokume gane look to them. They were also the last ones I used, and things very nearly went very badly wrong.

I'd been planning on making the round bead into a golden apple bag charm and the heart-shaped one into a pendant, but then disaster struck, after a fashion - the wire on the lampwork glass leaf headpin I'd been going to use for the apple broke. I had a spare, but that broke too, necessitating a rapid re-think.

Did I mention all this happened yesterday?

I actually booked the afternoon off work so I could (hopefully) teach myself to make Russian leaves to make a leaf for the apple that way, but it was still a worry all that morning because I'd always failed abysmally at making Russian leaves when I'd tried before.

In the end, the leaf worked, but not quite in the way I expected - Leona's gorgeous clay bead nestled beautifully into my first attempt, and I really loved the effect. Right about then was when I had another idea, and set my first (green) leaf aside to make one that matched the metallics in the clay.

Once I had a pendant made, I got up early to create a necklace with more metallic delicas, bronzite, tiger's eye and just a couple of faceted malachite rounds for a touch of colour. 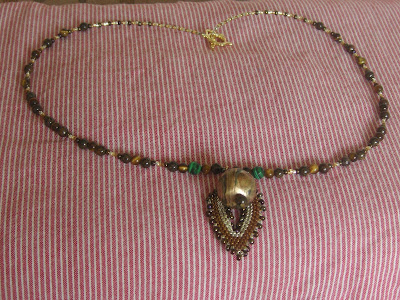 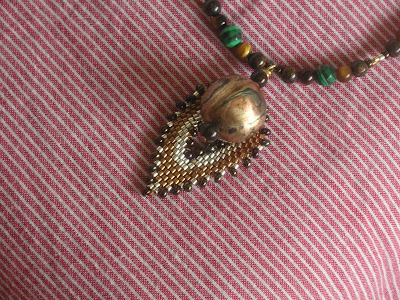 Really happy with this - out of all the pieces I made, I think it's the one I'm most likely to wear.

Thank you so much for sharing your beads with me, Leona, and I hope you were able to have as good a time with the things I sent you as I did with yours!

Sarah! I love what you did with the beads I sent you. The Kazuris really were meant to be supporting cast - so happy they found a place with the beautiful owl you made! The golden apple and leaf idea is genius! This is exactly why I love my beads to go out into the world and reach their full potential. Thanks so much!

Hi Sarah, your first necklace does look like a stormy day at sea. You chose the colors well to show the lovely lampwork beads. The Kazuri beads look good with your owl. Kudos to you for trying a new technique. Your Russia leaf was the perfect backdrop for the focal bead. Good job.

Very pretty group of necklaces. Your owl is super cute and matches so well.

That leaf is way cool!! I love how everything came out.

Everything is so pretty. I really like how your beaded owl works with the owl bead. Well done!

The necklaces are lovely Sarah nice that you are back to beading these days, I love the beaded owl it works really well.

I love the focal that you made in the last necklace. It is very creative and the rest of the necklace showcases it well.

I love that owl! How much fun is that? You did a beautiful job. Thanks for sharing so much inspiration with us.

I do get where you see a stormy sea with your first design's glass beads. All three of your necklaces are lovely, but I am kind of in love with your owls - both the owl you made and the smaller owl below it. Glad you came out of blog retirement to post!

Gorgeous designs and I love your brick stitch owl - he'd have been a lot of fun to make.

Great to see some bead weaving, I love your owl pendant, so cute! Very pretty work.

Terri Del Signore said...
This comment has been removed by the author.
2:01 am

Beautiful necklaces!! My favourite is the first one!

Nice necklaces. I love both owls. The Kazuri beads great with them. I've been to the kazuri factory in Nairobi. The beads are made by hand out of clay.

Oh that beaded owl focal is just adorable. I love what you made with your soup.

Wow you have made some beautiful pieces! i love the beaded owl, and the apple leaf is gorgeous.

Lovely & fun pieces... and you have such a great descriptive & creative imagination.. Thanks for sharing..

The swirls on the beads remind me of cappuccino! Love the colors!

The first piece is my favorite, though all are lovely. Great colors!

Glad you persevered with the Russian leaf since that is my favorite.

I really love your pieces. You definitely got a laid back look with the first necklace. The second owly one is so much fun! It's so fun with a happy accident turns into something really lovely such as in your third necklace. I love the focal with your stitched "leaf". I'm glad you dusted off the blog for this!

Wow, such skill with those teeny tiny beads. Great soup. Keep up the blogging.

Wow! Such beautiful work! I particularly love the things you did with seed beads!

Your beadwork is amazing!! Great job with your designs!

I love them all, but that last one really speaks to me. I love layered focals and you did a wonderful job!

Thank you so much for participating again!